Following the December announcement that Zahoransky would no longer exhibit at Interbrush, Ken Rakusin, president and CEO of Gordon Brush, shared a letter he sent to Ulrich Zahoransky and Robert Dous of Zahoransky on January 19, 2022. At last week’s ABMA Convention, Rakusin granted permission for Brushware to publish the full letter:

I am writing to you regarding your announcement last month about Zahoransky bidding farewell to Interbrush and no longer exhibiting. I refrained from writing to you until this time as I was quite upset and wanted to make sure that I wasn’t letting emotion get the best of me.

I find it quite offensive that Zahoransky has chosen to basically leave the brush industry behind and ignore the significant benefits gained by brush manufacturers and suppliers worldwide at Interbrush. I’ll use my personal experience over my 32 years in the business as an example.

In 1992 I made my first trip to Interbrossa after joining the brush industry 2 years earlier from my executive position with Xerox Corporation. It was with great excitement (and lots of jet lag) that I entered a tent to see brush machinery in operation that was so different from the two Boucherie’s that we had in our facility. We were a small company at the time and the ability to see so many things in one place at one time was very exciting.

The first machine that I saw in operation was making a staple set toilet bowl brush on a 5-axis machine. This is easy for me to write now but at the time I didn’t know what a toilet bowl brush was and had no idea what a 5-axis machine meant. After spending 30 or 40 minutes in this first vendor’s booth, I went to the next vendor and saw them making what looked like the same exact brush. But there was a major difference in the production rate. The first machine dramatically slowed when the 5-axis movements needed to rotate the brush to drill and fill each tuft, but the second one made the entire brush at full speed without the need to slow down. My simple calculations at the time showed that the second vendor’s machine would make more than twice as many brushes every hour. As a new person in the brush industry, within my first hour at the show, I learned something about throughput that I have never forgotten. How would I have learned this without being at Interbrush? Zahoransky not exhibiting would effectively end Interbrush and not allow a non-technical person like myself to learn a lifelong lesson.

Shortly after returning home, we started the process of buying our third CNC brush-making machine. With the knowledge gained from Interbrossa we were able to specify a machine that was installed in 1994 and now 28 years later it’s still working for us almost every day. The knowledge learned at the show was critical, as the manufacturer with the extremely slow speed machine was eliminated and not allowed to submit a quotation.

In 1996, at my second Interbrossa, I was much more comfortable and able to understand so much more as I viewed and interacted at booths of many more exhibitors. I was now almost an “expert” brush manufacturer and was able to ask detailed questions to learn more about machine capabilities and machines that could make different kinds of brushes. More importantly, I was able to start developing business friendships around the world and purchased several different small machines to assist in our manufacturing process.

In 2000, with the show split between Luxemburg and Freiburg we needed to purchase a new highly automated machine to make a certain series of brushes at high speed. On my way to Europe, there was a zero percent chance that our machine would come from Zahoransky because I was so disappointed that the show was being held in two locations and whether it was right or not, Zahoransky was being blamed for us having to go to two venues. I was adamant that I would not buy a machine from Zahoransky. As you know, after viewing the Zahoransky offerings in person we purchased our first staple set machine from Zahoransky. Please understand that this machine and the several other Zahoransky machines we have since acquired would not have happened if we didn’t see it in operation first.

In 2004, while in Freiburg I was negotiating every evening with my attorney and a paintbrush company that we were about to acquire. During the day while looking at all the normal vendors that Gordon Brush was interested in, I was also discretely looking at the paintbrush machinery vendors, an area that I never looked at before. Without Interbrush, where would I ever see this equipment? Actually, how would I even know which companies to talk to about equipment? Interbrush is invaluable.

I strongly disagree with Zahoransky’s reasons to no longer support Interbrush.

1) Trade show intervals are too long:

We in the brush manufacturing industry would welcome innovations at any time without waiting for Interbrush. However, seeing the innovations in person is 1,000 times more valuable than watching a video. Without Interbrush, we would never see a machine in person. Frankly, speaking for myself and Gordon Brush, we would likely not buy from a machine manufacturer like Zahoransky if they chose to not exhibit at Interbrush.

As stated above there is no need to wait to show an innovation. In the automotive industry, traditionally every year new innovations are added to existing vehicles when the model year changes. Tesla on the other hand doesn’t have consistent model year changes and brings innovations to their vehicles as soon as they are ready by updating software that is updated through over the air updates, keeping even older cars modern. Innovation would be welcomed at any time.

I disagree. Without Interbrush, a non-technical person like myself would struggle to learn about the brush industry as seeing the machinery and vendors in person is invaluable. Also, without Zahoransky exhibiting in 2000, Gordon Brush would never have bought that machine, or any of the other Zahoransky machines that we currently have. How many companies would be like us and not bought from Zahoransky? How many millions of dollars would Zahoransky not have in machine and spare parts sales?

4) Duration of the trade show and costs:

I have been to seven Interbrush shows, all except the canceled 2020 exhibition. From a brush manufacturer’s perspective, it’s a perfect amount of time. The first day allows one to do an overview of the product highlights from every supplier. Day two detailed time can be spent in customer-vendor meetings, and day three is when one can make sure there is nothing on display that was missed. With the show in Freiburg, Zahoransky has a built-in advantage as you can easily schedule visitors to come to your off-site facilities after the show has ended.

I understand that preparing and exhibiting at Interbrush is quite expensive and it takes an inordinate amount of manpower to host the show, but those costs are built into Zahoransky’s advertising budget, and then passed on to machinery and spare parts pricing. Indirectly, Zahoransky’s customers pay for Zahoransky’ s cost for Interbrush.

Your letter references an event on Zahoransky’s premises. This might be the most disappointing sentence in your letter. This goes contrary to what Interbrush has done for the brush industry since 1977. Inclusion. Inclusion of every company worldwide in the brush trade. An event like no other in the world. Zahoransky is coming across totally pompous and arrogant, and if one wants to attend your event in your facility, think of the logistics issues, costs and time they will incur. It’s a long way to Europe from Los Angeles and I will not travel to Europe for a single company’s event as it won’t be worth my time. Interbrush exists to prevent this kind of issue and has done a remarkable job since 1977.

I don’t know if you fully understand how brush manufacturers work together and help each other out. As this letter will be seen by my peers in the industry, I will omit specific names but as an example, Zahoransky sold a machine to another company in the USA based on me allowing them to come to my facility and watch one of your machines in operation. We allowed them to stay in our facility for 1-1/2 days and study how the machine worked, talk with our maintenance mechanics, and review our production rates. Based on my personal recommendation, they purchased a Zahoransky staple set machine. This cooperation happens on a regular basis with the friendships that develop in the industry.

Every four years I look forward to going to Freiburg with my team so we can see better ways to make brushes and find suppliers that can keep our business growing and moving forward.

Based on Zahoransky removing themselves from Interbrush, below is what my companies and I will do:

I strongly hope you reverse your decision and nothing else (like Covid) prevents Interbrush from being a showcase to the brush industry in 2024. 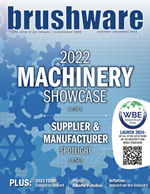